Will Tatum works the paint for Plains. (Tracy Scott/Valley Press)

Aaron Pfister gets a layup for Plains. (Tracy Scott/Valley Press)

It will come. Maybe not today or this week or next week. But it will come and how sweet it will be.

It will be the “thrill” of victory, not the agony of defeat.

But for now, the agony continues for both the Plains boys and girls basketball teams as they head into the second half of the season.

Maybe a good omen was that despite numerous other games being postponed or canceled due to the recent heavy snowfall, the boys and girls from Plains did not miss a beat.

The boys lost to Charlo this past Friday, falling 64-28 on their home court. They followed that with a thorough trouncing at the hands of Eureka, 78-11, in a Western 7B conference game in Eureka.

The girls endured the same agony, losing 37-17 on their home court Friday, then getting beat 53-29 the next night in Eureka.

Both teams have yet to win a conference game and are 0-2, while the girls are 0-4 overall and the boys stand at 0-3.

Both teams are littered with young talent that give hope for better days ahead.

The boys kicked of the week with a home game against Western 14C conference member Charlo.

The visiting Vikings were like their namesake raiders, wreaking havoc on the Horsemen on their way to a 21-6 first quarter lead. They would continue the carnage in the second quarter by outscoring Plains 14-4 to build a 35-10 halftime lead.

Charlo would add to that lead in both of the remaining quarters of the game, including outscoring Plains 16-8 in the fourth quarter.

The win squared Charlo’s overall mark at 4-4 on the year.

The next night against Western 7B opponent Eureka, the bottom fell in for the Horsemen.

The Lions roared to an insurmountable 36-3 lead at the end of the first quarter, then padded that lead in the second quarter as they upped their advantage to 53-6 at the half. The more than 40-point lead triggered the Montana high school Mercy Rule which keeps the clock moving except for timeouts and injuries.

Unfortunately for the Horsemen, not even the Mercy Rule could take the sting out of this one. By the end of the third quarter the Lions were up 67-8, then added another four points to their lead to reach the final score.

The girls games were somewhat closer, but no less painful for a young team searching for a way to win.

The two teams battled back and forth in the opening quarter, with the Lady Vikings holding a narrow 10-7 when the buzzer sounded. But Charlo’s defense shut down the Trotters scoring, winning the quarter 8-0 on their way to an 18-7 halftime advantage.

The third quarter was even-Steven, as both teams scored eight points, sending the game into the fourth and final quarter with Charlo on top 26-15.

But Charlo’s height and experience proved to be the difference as they added nine points to their lead in the final eight minutes to post the victory.

The Trotters traveled to Eureka the next night where they ran into a buzz saw opponent. The Lady Lions erupted for an 18-2 lead after the first quarter and were never threatened the rest of the way.

By halftime Eureka led 30-7, then added to the lead in the third quarter to build a 45-13 edge going into the final eight minutes.

Plains outplayed and outscored Eureka in the final quarter, 16-8, but the damage had already been done.

Both the Horsemen and Trotters have a busy week ahead with three scheduled games. They host Hot Springs tonight (Tuesday, Jan 11), then square off against Western 7B foe Mission from St. Ignatius this Friday, also in Plains.

They will close out their week with a Saturday night road trip to Arlee. 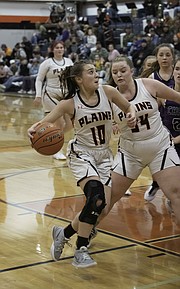 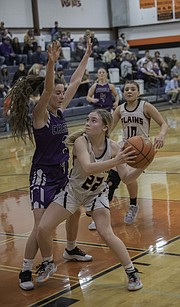 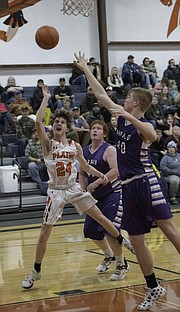 Aaron Pfister gets a layup for Plains. (Tracy Scott/Valley Press) 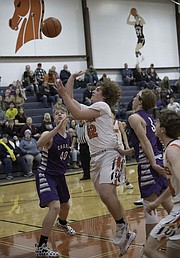 Will Tatum works the paint for Plains. (Tracy Scott/Valley Press) 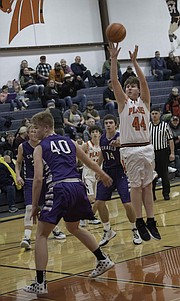