Halie Tompkins as Miss Scarlet and Ireland Corbin as the French maid.

Friday evening, the community of Plains filled the new school gymnasium to enjoy the first play for the school year, "Clue," directed by Terry Henry and assistant director Cathy Emmet.

A comedy at heart, "Clue" takes place on a stormy night at the Boddy Manor. A host of unusual dinner guests, with each having aliases, stumbles through the evening as the body count rises. Short one liners kept the audience laughing through the play. Fumbling through the evening, each of the dinner quests suspect each other and try their best to discover the true murderer. "Clue" is a comedy based on the classic film and board game.

The play was performed by the drama students of Plains.

School Superintendent Thom Chisholm said students practiced for about eight weeks leading up to the performance.

Lenka Harris said, “it was exciting to watch her daughter, Cecilia, in her first play.”

Director Henry said, “They did excellent.” 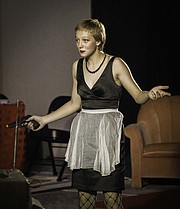 Halie Tompkins as Miss Scarlet and Ireland Corbin as the French maid. 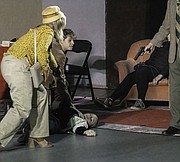 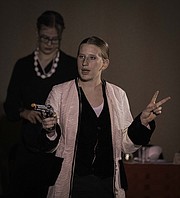 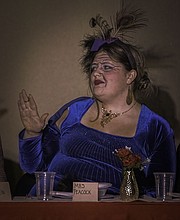