When Mike Boone announced his resignation as Mineral County Sheriff on June 28 and that July 3 would be his last day, Roman Zylawy, chairman of Mineral County Commissioners, asked Boone to please reconsider the date due to the short notice and the July 4 holiday that upcoming weekend.

Aug. 1 then became Boone’s last day. This became a contentious subject with many residents because by state law, the county commissioners would appoint the new sheriff. If Boone would make July 31 his last day, there would be an election for the position.

Boone stuck to his guns and the commissioner’s moved forward advertising the position that enticed seven people to submit applications. Public comment at each of the county commissioners Friday meetings during July were boisterous to turbulent at times to the point that Ernie Ornealas, Undersheriff of Mineral County, had to step in once.

On the afternoon of Friday, July 31, the commissioners had a final public meeting before conversing with each other in public at their table on their top choices for the position.

Questions and comments were again taken from those in the room before Zylawy called the official meeting to order. Commissioner Duane Simons made a motion to select Mike Toth from the seven applicants.

Commissioner Laurie Johnston, seconded Simon’s motion on the condition of Toth currently living in Montana and moving to Mineral County. Zylawy voted the third yes and Mike Toth was appointed the new sheriff.

Toth owns a security guard company and is a licensed private investigator in Montana. “This is quite the honor,” he said from Billings. “I have wanted to get back there and work for the county again for a long time” referring to his time as a deputy with the Mineral County Sheriff’s Office when Sheriff Anita Parkin hired him in 1999.

In 2004, Toth went to work for the Seattle Police Department where he spelled out that this was a big learning experience. Toth went to college in Wyoming for Police Science.

He paid his own way through the Montana State Police Academy and has worked for the Red Lodge Police Department and as a guard at the Federal Courthouse in Billings.

If his name sounds familiar and you were not here when he was a deputy, you may recall that he ran for this position against Tom Bauer six years ago. Toth took his oath of office Monday, August 3. 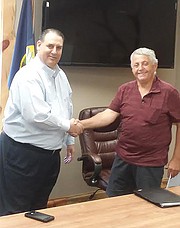