In early February Beau Crabb sits next his very first geocache he found off of Mullan Road in Superior. (Photo courtesy Chancey Crabb)

Springtime in Montana provides ample opportunities for outdoor recreation. Now is the season for many to take to the forests to hunt for coveted morel mushrooms, or prized deer or elk sheds.

But for some locals their pursuit is a year-round modern-day treasure hunt. Geocaching is the recreational activity of hunting for and finding a hidden object by means of GPS coordinates and clues.

Geocaching has been around for twenty years now, but for several Mineral County residents they have just caught on to these exciting technological mapping quests.

“Well my husband was showing me some videos of other people finding them and we thought it would be fun to do with the boys,” said Superior resident Chancey Crabb. “So, we looked and saw how many were around our area which was exciting to see.”

Worldwide there are three million recorded geocache sites. There are close to 500 in Mineral County spread along backroads, in towns, up near mountain lakes, along trails and rail road beds. Caches vary in distance to the location, size, terrain, and difficulty in finding them.

“Beau gets mad if I find them before he does,” she kidded.

Her family tried geocaching for the first time in January and since then they have found 30 caches.

“It took us a few finds to get it down but now we’re hooked!” Crabb said.

To get started in the geocaching world beginners simply make a membership at https://www.geocaching.com/play.

Next visit the hide and seek a cache page and enter your zip code, hit search and watch as all of the dots start to appear. Choose a geocache from the list and then you can either enter the GPS coordinates into the App if you have a smartphone or into your GPS device.

Use your GPS device to assist you in finding the hidden geocache, once you’ve discovered it make sure to sign the logbook, and if you take something from the cache leave something of equal or greater value before returning it to its original location.

“Most of them have a hint that will help if you can’t find it to begin with. Also, other people’s comments are helpful if you are stumped!” Crabb said.

Superior resident Loretta Parker Dana has been out finding geocaches since last fall with her husband Kiley.

“It was super easy. Just download the app, and then away you go!” Dana said. “Last Labor Day, my cousin was down from Polson, she has over 3,000 caches. We went for a drive to Silver Lake to pick huckleberries and my husband found his first one there. Now we are hooked.”

The couple have since found 304 geocaches, most of them around Western Montana, but the pair even found one on vacation down in Mexico. On a weekly basis now, they are out and about entering in coordinates and tracking down their next find.

Dana said the best part “is just being outside and the hunt. Be patient and don’t overlook things.”

Another aspect to geocaching is that those hunting can also hide and create their own caches to be added to the online catalog and map.

“We plan on putting one out in the next couple weeks,” Dana said.

It’s common for geocachers to place caches in spots that are significant to them, the cache may hold items that represent a special interest or skill of the owner. These locations can be quite diverse.

They may be at your local park, at the end of a long hike, underwater or on the side of a city street. It’s important that while out looking for a cache you do it discreetly and quickly, this protects them from being disturbed by “mugglers” or people who aren’t cachers.

Darlene Jasper and her family have found some in and around Superior.

“We have found lots,” Jasper said. “The tiniest ones aren’t as fun for the kids because they are usually slips of paper that you log your name on. Some of the bigger ones have little trinkets inside. You can take a trinket and put a trinket in.”

“I like geocaching because of the adventure you go on while solving riddles and following the map to find a prize,” Perri said.

Younger sister Lily expressed “geocaching is fun because it’s like you’re trying to find a treasure!”

In the town of Superior there are 16 caches, 10 of which have been hidden by postal worker Liz Asay. Since 2018 she has found 457 around Montana, all the down in Florida and even up in to Alaska.

“Every time I go somewhere new even in Montana I look to see if there is a cache hidden anywhere,” Asay said. “I like to hide them and find them but I find more then I hide, as you can see. I have found geocaches pretty much everywhere I’ve gone.”

“I’m actually quite addicted to it and can spend an entire day caching,” Asay said. She said the most she has found in one day was 35.

“I like to cache because it gets me out doing things and seeing views and scenery I wouldn’t see without caching,” Asay said. “It takes you places you wouldn’t normally go.”

One of the best ways to learn how to geocache is tag along with a seasoned cache finder.

For those looking to create a cache it is recommended that items in a cache be individually packaged in a clear, zipped plastic bag to protect them from the elements. 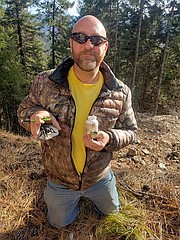 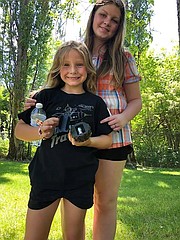