Calie Wagnor takes the ball up the court against Bigfork. (Tracy Scott/Valley Press)

Kaylah Standeford makes a move in the lane against Bigfork. (Tracy Scott/Valley Press)

Bigfork is a beautiful place on the other side of Flathead Lake, with no doubt plenty of really good Montana folk.

But their basketball teams were less than congenial guests as the Vikings and the Valkyries rode all over their Plains hosts this past Tuesday in Plains.

The Valkyries, named for the maidens of the mythical Norse god Odin who look after the souls of those killed in battle, and their boy counterparts, rolled to easy victories in their brief trip to Sanders County. The ladies won 68-20 while the Viking boys triumphed 67-17.

Both games were essentially decided early on as the visitors racked up substantial first quarter leads against the win-less Plains teams.

In the girls game, Bigfork scored early and often against the Trotters. They showed why they are undefeated in the early part of the 2021-22 Montana basketball season when they bolted out to a 27-4 lead at the end of the first quarter of play.

Things did not get much better for the outgunned host Trotters in the second period and by halftime the visitors held a 43-10 lead.

Buoyed by a pair of players who scored more than 20 points on the night, the Valkyries kept up the pressure the rest of the way, outscoring Plains 16-6 in the third quarter. With eight minutes to play Bigfork held an insurmountable 59-14 lead, an advantage which invoked the Montana high school Mercy Rule in which the clock rolls on continuously in a game where one team is ahead by 40 or more points.

The visitors would add five more points to their lead in the fourth quarter to run their season record to 6-0 and their conference record to 3-0.

Emmah Berreth and Braden Gunlock scored 21 points each for the Valkyries while Scout Nadeau chipped in 10 points for the victors.

Kaylah Standeford topped the Trotters in scoring with seven points.

The loss kept Plains winless for the year.

The Plains boys did not fair much better in their game with the Vikings boys.

They fell behind 20-8 after one quarter of play, then things went from bad to worse for the Horsemen, who have no upperclassmen on their roster.

Bigfork picked up the defensive pressure and outscored Plains 22-0 in the second quarter to secure a 42-8 lead at halftime.

The Vikings had three players score in double figures as they outscored the Horsemen 8-3 and 17-6 in the final two quarters. Bryce Gillard led the way for the visitors with a game high 16 points, while teammates Nick Walker and Levi Taylor tallied 10 points apiece.

The loss dropped Plains to 0-5 on the year.

Both the Horsemen and Trotters return to play next week with a home game against Charlo on Friday, January 7. They will then hit the road the following evening and travel to Eureka for a pair of games with the Lions and Lady Lions. 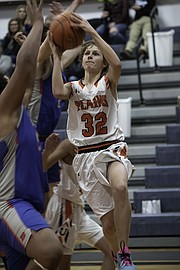 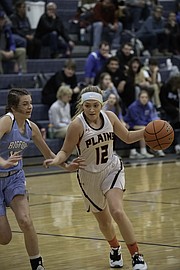 Kaylah Standeford makes a move in the lane against Bigfork. (Tracy Scott/Valley Press) 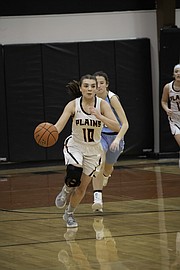 Calie Wagnor takes the ball up the court against Bigfork. (Tracy Scott/Valley Press)