“Those who hope in the Lord will renew their strength. They will soar on wings like eagles; they will run and not grow weary, they will walk and not grow faint.” Isaiah 40:31

Howard Dean Reese, 80, peacefully went home to the Lord on Saturday, December 17, 2022, at his Alberton home while surrounded by family. Born August 23, 1942, Dean lived a full life with faith in God, love for his family, awe of natural beauty, and a wide network of friends as his cornerstones. Father to Stacy King, Wendy Cabrales, Launi Holland, Kelly Avants, Joshua Reese and Jenny Herrick, and married to their mother Linda from 1962 to 1998, Dean’s pride and joy was found in the successes of his six children, 18 grandchildren and six great grandchildren all of whom he loved dearly.

Born in San Diego, California, to Troy and Edna Reese, Dean spent his childhood playing baseball and football, riding go karts down long La Mesa hills (sometimes crashing to the dismay of his mother), and journeying by bike to the beach and nurseries in the area. It was in the exotic plant nurseries of Southern California, absorbing America’s natural beauty in car rides to visit family in Oklahoma, and in the chore-that-was-never-a-chore of caring for the family’s yard that Dean first discovered the roots of what became a lifelong profession of landscape design. After attending La Mesa Elementary School, La Mesa Intermediate School, and graduating from Helix High School in 1960, Dean wrestled at Mount Sac Jr. College and, during one Christmas break job as a reindeer in the Disneyland Holiday Parade, met his future wife who was also performing in the parade.

After college, he quickly gained recognition for his creative artistry as a landscape designer and was an integral part of the design teams responsible for projects like LA’s Westlake Village, Six Flags Magic Mountain, CA Great America, and Six Flags Carowinds. In the years in which he owned his own commercial landscaping business, Dean was well known for drawing the beauty of nature into hundreds of apartment complexes, commercial businesses and private homes.

The demands of running a business and driving long distances between job sites never stopped Dean from exploring God’s natural beauty, and you’d often find him parked alongside roadways and rivers studying a waterfall or interesting plant, or counting elk in a meadow… and he’d often quiz family members on the names of plants and trees they passed along the way. He shared with his family his love of nature and the outdoors, and for long road trips, and took great joy in introducing his kids and grandkids (and any willing friend) to trout fishing, deep sea fishing and crabbing along the Oregon Coast, the joy of Gator rides around his property, the wild beauty of America’s national parks, and the serenity found in the forests, glacial lakes, rivers and valleys of Montana.

Along with lessons in finding the perfect fishing hole, Dean passed along to those lucky enough to know him, an incredible work ethic paired with the ability to be still and marvel at a star-filled sky or a babbling brook, and extraordinary generosity to those in need. Later in life, he re-committed himself to Christ and spent countless hours studying the Bible, sharing his testimony and encouraging others toward a deeper relationship with God; and his Montana friends made during that time held a special place in his heart.

An avid athlete himself, Dean’s all-time favorite pastime was cheering on his kids and grandkids in their sports and school activities, and he often drove long-distances so he could be on the sidelines or in the audience for their important events.

A celebration of life service will be held at a future date and time on Dean's Montana property. 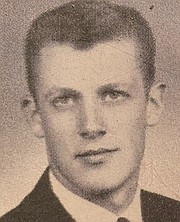