Decker Milender wrestling in the Rocky Mountain Classic in Missoula. Milender finished sixth at 126 pounds. (Kami Milender, for the MI)

Chandon Culled of Superior finished 8th at 285 pounds at the Rocky Mountain Classic. (Kami Milender for the MI)

Covid or not, all three Sanders and Mineral county high school wrestling teams saw tournament action this past weekend in a pair of high quality events in Choteau and Missoula.

Two of the area teams, Plains/Hot Springs and Thompson Falls/Noxon, along with women’s teams from each, attended the Choteau Classic, held Friday and Saturday in the northern Montana town.

And both teams came away with some solid performances from both boys and girls wrestlers.

Thompson Falls boys’ team finished fifth in their part of the tournament, which attracted 25 boys teams and 14 girls teams.

Plains/Hot Springs came in eighth with 101 points in the boys team competition. Jefferson High of Boulder won the team title with 215 points.

The Thompson Falls boys were led by the first place title awarded to two-time defending state champion Trae Thilmony, who pinned Brady Ellison of Columbus/Absorakee/Park City in 3:32 in the 145-pound division

The Blue Hawks also got a second place finish from 170 pounder Max Hannum, who lost to Chinook’s Tyler Schren on a 10-0 md decision. Shane Reishus added to the Blue Hawks’ total with a third place finish at 152 when he won a tough 3-1 decision over Conrad’s Chris Graham.

The Plains/Hot Springs women got a pair of firsts, with Brynn Courville winning at 138 pounds and Lillian McDonald finishing first in the 152-pound category.

The Plains boys got a second place finish from David Schulze, who lost a 3-2 decision to Anaconda’s Tommy Sawyer at 138 pounds. They also got fourth place from John Waterbury at 126 pounds, fifth place from August Courville in the 103 pound division, and sixth place from Gavin Schrenk, also at 103 pounds.

In the Missoula event, known as the Rocky Mountain Classic, Superior finished 21st out of 27 mostly large school teams.

The Bobcats amassed 42 points, while the team leader for the event, Glacier High, piled up 122 points. 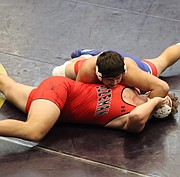 Chandon Culled of Superior finished 8th at 285 pounds at the Rocky Mountain Classic. (Kami Milender for the MI)