A public meeting was held last week at the Plains County Fairgrounds to discuss acquiring 11,804 acres of forestland south of Plains.

The lands in question were originally given to the Great Northern Railroad by the federal government to recover the costs of constructing their rail lines running from St. Paul, Minnesota to Seattle. Over the years the properties change hands many times and the land in question is currently owned by MKH Montana.

MKH owns land in Mineral, Sanders and Missoula counties with most of their lands in block management, open to public use. The company entered into an agreement to purchase land in Missoula and Sanders counties with the Forest Service and the Trust for Public Lands, a nonprofit organization that has helped preserve over 675,844 acres of land in Montana for continued public use. However, the Forest Service declined the property in Sanders County in early 2022 because of higher priority projects.

MKH is actively seeking other purchasers but is open to selling the property to the state within two years.

One of the individuals spearheading the effort to acquire the property is Zach Whipple-Kilmer, owner and manager of Limberlost Brewing Company in Thompson Falls. He has been working to help create conservation areas in Montana.

Whipple-Kilmer recently helped acquire conservation easements on 50,000 acres along the Thompson River drainage. He has created the website plainspublicacess.org, concerning the lands south of Plains, owned by MKH, located between Pat’s Knob and Sacagawea Peak.

Each of the individuals had an opportunity to speak and answer questions from the public.

Carr opened the meeting saying he had contacted the DNRC and the governor’s office. He said, “It’s a long shot," and that the public needs to urge officials to find the organizations and the $16 million needed to purchase the land.

Whipple-Kilmer pointed out where each of the land blocks were located and said that these were the last lands open for purchase around Plains.

Olsen, the DNRC Manager in Plains, was next up for questions. Meeting participant Ed Farmer raised his concerns about public access with so many gates being closed.

Forest Service employee Domsalla suggested working with other organizations such as Rocky Mountain Elk Foundation, Trust for Public Lands, and with the public’s help, the state of Montana.

Sen. Brown said, “We need to focus on a solution to accomplish this” and suggested that the public needs to get involved. He said that he will be getting more involved 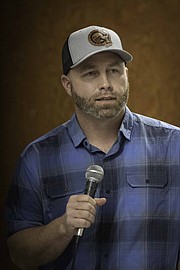