Plains forward Anaya Loberg goes up for a shot in the game against Arlee Thursday evening in Plains. (Tracy Scott/Valley Press)

Plains boys and girls basketball teams continued to try to find their groove this past week, with the Trotters taking Arlee to the last few minutes of a tense, hotly contested game before falling to the Scarletts 36-32 in Plains.

Two days earlier, the Trotters traveled to Missoula and were routed by Loyola 71-26.

The Horsemen, meanwhile, took on two of the top teams in the Western 7B conference and were outgunned 77-26 versus Missoula, and 86-26 two days later at home against the Arlee Warriors.

The Trotters and Arlee were locked in a close game the whole way Thursday night on the Trotters’ home court. Arlee took anearly 2-0 lead, then surrendered it briefly when senior forward Carlie Wagoner scored three points to give Plains its only lead until the early moments of the fourth quarter.

Wagoner scored all five of her teams first quarter points, but it was not enough to prevent the Scarletts from taking an 8-5 lead at the end of the first period of play.

Plains pulled within two points of the lead several times in the second quarter but could not quite catch the visitors who held on to a 20-18 lead at the end of the first half.

Both teams played aggressive defense that generated multiple turnovers on each side of the court. Wagoner injured her leg in the second period and missed the rest of the first half as she was tended to. She returned in the second half.

With action on the court getting testy between the two teams, Arlee managed to squeeze out a 29-23 lead at the end of three.

Wagoner and one of the Scarletts players were involved in a one-shove confrontation midway through the third quarter, which saw the Trotters tie the score at 30-each on a two-pointer by Wagoner. Plains would take a brief two-point lead a few minutes later on a two-pointer by Kassidy O’Keefe, who had two long three-pointers in the first half to keep the Trotters in striking distance.

The Scarletts regained the lead with just under two minutes to play on a free throw by senior Raven Parsons, then went up by three, 35-33, on a Parsons steal and layup with :29 second left to play.

Wagoner finished with an unofficial team-high 14 points on the night.

Parsons, who led Arlee in scoring, added one more free-throw with one second remaining to seal the Scarletts’ win.

The win was the second of the year for Arlee, which stands at 2-7 overall. Plains dropped to 2-9 with the loss.

Wagoner was also the Trotters’ leading scorer earlier in the week against Loyola, matching her total of 14 against Arlee. Plains also got eight points from sophomore post Lexi Deming, who continued her strong rebounding work on both ends of the court.

Against the Breakers, Plains fell behind 18-6 after the first quarter of play, then trailed 38-10 at halftime. Missoula continued to pour it on in the third quarter, outscoring the Trotters 20-6 and coasting to the win.

The Horsemen did not fare any better, falling behind early in their Thursday home game vs Arlee, 29-6 after the first eight minutes of play. Plains got some offense going in the second quarter, but still trailed 51-20 at the half.

The Warriors’ defense held Plains to just six second half points as they continued adding to their already insurmountable lead.

Eduardo Perianez scored nine points to lead the Horsemen, who dropped to 3-8.

Plains was coming off a lopsided loss to Loyola Tuesday night in Missoula to start their week.

The Horsemen fell behind big in the first quarter in that game, trailing 22-2 at the end of the first eight minutes of play.

The Rams kept up the defensive pressure in the second quarter while adding to their lead, which reached 48-14 at the halftime intermission.

The young Horsemen could not get things rolling in the second half as Loyola cruised to the win. Perianez led Plains in scoring with 11 points, while Loyola had four players score in double figures, paced by Ethan Stack’s 12.

Next up for the Plains teams is a showdown with Sanders County rival Thompson Falls this Friday night in the Plains High gym. The meetings with the Blue Hawks and Lady Hawks are the only scheduled games for the Horsemen and Trotters this week. 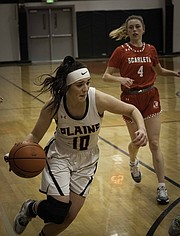 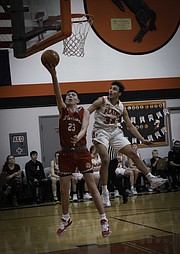 Plains forward Anaya Loberg goes up for a shot in the game against Arlee Thursday evening in Plains. (Tracy Scott/Valley Press)